The following is an excerpt from Lama Shenpen’s life story book, published May 2020: Keeping the Dalai Lama Waiting & Other Stories – An English Woman’s Journey to Becoming a Buddhist Lama.

The book is an entertaining and fascinating autobiographical account of how the search for Truth lead Lama Shenpen to Buddhism and becoming a lama. In the book Lama Shenpen takes us along her journey from the UK to the Himalayas in the late 1960s and 70s, where she was taught by some of the most eminent Buddhist masters of our time. The book’s journey concludes in Ynys, near Criccieth, north-west Wales with the establishing of the Hermitage – the base for the Awakened Heart Sangha, a retreat centre and Lama Shenpen’s home.

In the passages below we learn about the extraordinary circumstances that led Lama Shenpen to north-west Wales, to the Hermitage and to building a stupa – following the advice, divination and prophecy by His Holiness Dilgo Khyentse Rinpoche, the teacher of all Lama Shenpen’s teachers, who is also well known as one of the main teachers of the Dalai Lama.

How could a Tibetan master who had never been to Wales know of the special quality of the landscape that is considered sacred in local history, myth and legend? With stories of dragon’s, holy men, sorcerers and hidden texts, the mysterious history and folklore of North Wales plainly resemble the stories from the lives of celebrated Tibetan masters.

Dilgo Khyentse Rinpoche drew a rectangle on a map of the UK, covering an area of north-west Wales, which included Anglesey and Bardsey Island, as well as Snowdon and the edge of lake Bala.

Dilgo Khyentse Rinpoche then requested Lama Shenpen look for suitable places within the rectangle, and to send him the names of the places she found, and he would make another divination and tell her if they were the place or not. He said Lama Shenpen should build a temple or a stupa, but to take her time to find the place, because it would be there for hundreds of years.  Of the names sent to him, His Holiness specifically identified the Pennant Valley, Garn Fadryn (Madryn Mountain) as special places, so the search was narrowed to around those.

After Dilgo Khyentse Rinpoche died, Lama Shenpen eventually moved to The Hermitage which is situated in sight of the Pennant Valley and Snowdon, and was able to fulfill His Holiness’s advice and build a stupa. A local geomancer also discovered the site of the Hermitage to be an incredibly unique place.

The story of finding the Hermitage and building a stupa is described in Lama Shenpen’s book ‘Keeping the Dalai Lama Waiting & Other Stories’, and all starts with a wish by Trungpa Rinpoche to build a lake and an island with a Guru Rinpoche image on it.  Following Trungpa Rinpoche’s death, Rigdzin Shikpo and Lama Shenpen asked Dilgo Khyentse Rinpoche if it was a good idea to fulfill this wish and Dilgo Khyentse Rinpoche said they should:

“Look for a lake and island west of London.  Later that year in Paris, we asked him if he could be more precise, at which he marked a map of Britain telling us to look for a suitable place in north-west Wales.  The hunt was on, but what exactly were we looking for?”

Lama Shenpen’s first home in North Wales was at Tyn y Gors which:

“…Included ten acres of land and a small lake with an island, at the foot of a hill famous for the fortified iron-age village on its summit.  It is in an area steeped in history and legends, including that of a Druid priest telling his chieftain disciple to retrieve from a cave in the side of that hill a sacred wisdom text in a casket guarded by demons.  It is an exact parallel to the stories from Tibet about treasure texts hidden by Guru Rinpoche being revealed by yogins called Tertons.

Dilgo Khyentse Rinpoche had done a divination and said it was a suitable place for our residence, but not the place.  Rigdzin Shikpo wondered if his saying ‘the place’ meant we were looking for a sacred place, something that in Tibetan Buddhism is referred to as a hidden land.

We kept looking, sending Khyentse Rinpoche lists of place names that felt sacred to us and of these he named two areas as special and told us to find suitable land for sale there.  I had kept up the search while Rigdzin Shikpo was in retreat and I also went out to Nepal to ask Khyentse Rinpoche for more details about his vision so we had a better idea of what we were looking for.  Khyentse Rinpoche told me we should take our time finding the place because it would last for hundreds of years.  He also said that when we found it, we should build a purpose-built temple or stupa there.  As for a hidden land, he replied, that was in the heart.”

Lama Shenpen eventually moved into Tyn y Gors after 10 years of looking for a place, when it came on the market. Then, when it became necessary for Lama Shenpen to look for a new place for retreat for herself and her students, Lama Shenpen asked her teacher Khenpo Rinpoche (as by now Dilgo Khyentse had passed away,) if he would be satisfied if she looked for another place near Tyn y Gors.

“He said he would be and by some miracle, which I always attribute to his blessing, I found a property just twenty minutes’ drive away, twice as big but for the same price that we’d paid for Tyn y Gors.  Even though we took a year to come up with the money, once the price had been agreed the owners waited for us, steadfastly refusing to put the place back on the market despite pressure from the estate agents, saying, ’We have given our word and we will stick by it.’  I am sure the karmic result of their doing so will connect them to the path of Awakening forever!  Bless them.

When the exchange of contracts finally came through, we were in the middle of a month’s group retreat at Tyn y Gors.  Jonathan had carefully prepared everything in advance in case this happened and with unbelievable efficiency he stage-managed us to move house and continue our retreat at the new house within just a matter of days.  Even more remarkably, since Khenpo Rinpoche happened to be in the country at that time, we fitted in a weekend Lama-visit, before settling back into retreat for another two weeks.  The timing had been perfect for Rinpoche to be there to thoroughly bless the place on our arrival.  He named it Changchub Dzong, Citadel of Awakening.

We called it ‘The Hermitage of the Awakened Heart’ and ‘the Hermitage’ for short.

On Khenpo Rinpoche’s last visit to the Hermitage, we went by car to pick him up from Manchester.  As he climbed into the car, he looked up at the sun in the cloudless blue sky and sang in Tibetan:

What appears is clarity,
Emptiness is clarity,
Wisdom is clarity as well.
The meeting of these clarities three
Is like the sun in the sky cloud-free.

‘Translate it and compose a tune for it,’ he said. Then, ‘Sing it over and over again.’  I did as he said and as we drove the two hours to the Hermitage, I could tell he was listening as I sang by the way he slightly nodded his head in time with it.  When the car pulled up at the end of the Hermitage drive there was a palanquin waiting for him and eight strong men of the Awakened Heart Sangha asking him to step onto it.  He did so without batting an eyelid, as if it were the most natural thing in the world.  They lifted him onto their shoulders and carried him up the drive.

Everyone had gathered to welcome him so a whole crowd accompanied him up the drive singing and dancing as he stood up on the palanquin above us happily tossing flower petals into the air as he went, as a sign of auspiciousness.  Once he was settled in the house, he told me and my students to dance on the lawn in front of the house singing the song I had been singing to him in the car.  We created a dance that ended with us all lying in a star shape looking up at the sky, while Rinpoche watched us from an upstairs window.  Afterwards he remarked that our looking up into the sky like that was an auspicious sign that our sangha would be closely connected to Dzogchen, the realisation of the true nature of mind.

After ten years we had succeeded in establishing a sangha with a strong core of a dozen students sharing the same values and culture, committed to preserving its teaching activity and delivering it to others.  One of the first decisions of this group, called the Shrimalagana, was to build the stupa I had been planning for many years, in accordance with Khyentse Rinpoche’s wishes.  At the centre of our stupa at the Hermitage is a much smaller stupa blessed by Khenpo Rinpoche set in the central pillar and around the pillar is wrapped the text of the Ratnagotravibhaga on Buddha Nature.

The stupa also contains relics of many of the Karmapas, as well as Trungpa Rinpoche, Khyentse Rinpoche, Bokar Rinpoche and others.  In 2011 Lama Phuntsok consecrated the stupa at the Hermitage in the presence of Rigdzin Shikpo and our students from all over the world plus many local people who had contributed to the building of it.

For me this symbolised and embodied the power and stability of the lineage at the heart of the sangha community.  Since the stupa was built the sangha has gradually gone from strength to strength.”

This is an extract by Lama Shenpen Hookham from Keeping the Dalai Lama Waiting & Other Stories – An English Woman’s Journey to Becoming a Buddhist Lama. Text and images (unless otherwise stated) are copyright of the author and are reproduced with permission.

Please note that not all the photos above appear in the book, and the photos in the paperback are printed black and white. 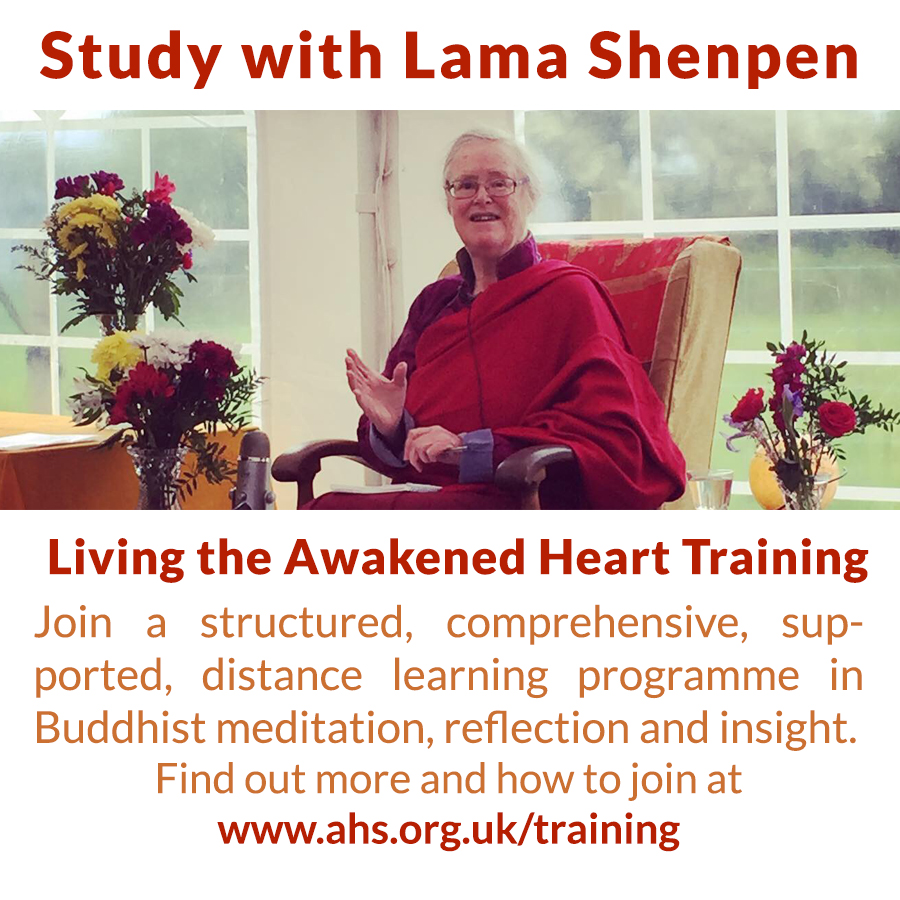 You are invited to make a donation to the Shrimala Trust in appreciation of Lama Shenpen’s teachings. It is customary in Buddhism to practise generosity or ‘Dana’, making an offering to the teacher acknowledging and appreciating the generosity of the teachings, creating an energy exchange that augments the mandala.